When we sleep, we go through different sleep stages which take place following a repeated pattern of 4 to 6 cycles during the whole night. Each cycle lasts approximately 90-120 minutes.

Sleep disorders interrupt the sleep cycle and stop the patient from entering into sleeping stage 3; this causes a lack of restful sleep, increasing the risk of disease and accident caused by sleepiness. 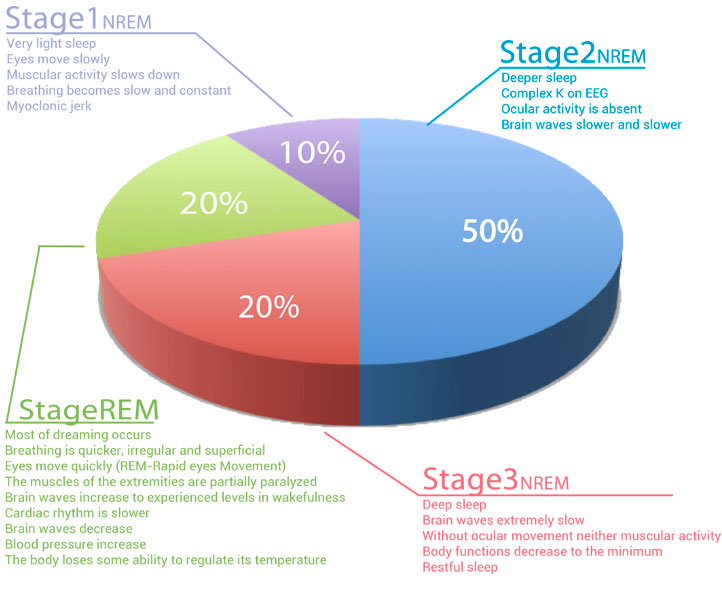 Sleep apnea is the most frequent respiratory disorder during sleep. According to the recent study 'Clinical Guideline for the Evaluation, Management and Long-term Care of OSA in Adults, the AASM., conducted by Lawrence J. Epstein” Obstructive sleep apnea (OSA) is a common disorder affecting at least 2% to 4% of the adult population.

People who suffer from this respiratory disorder are regular snorers and have breathing pauses of variable duration; those which last more than 10 seconds are more important from a medical perspective.

There are three sleep apnea severity degrees, according to the Apnea-Hypopnea Index (AHI):

'An estimated 56% of patients with OSA are positional'.

Certain factors may increase the risk of suffering from sleep apnea:

The following symptoms may be signs of suffering from sleep apnea:

With a disorder as frequent as this, more than half of the patients should follow treatment. However, only 10% have been diagnosed and receive a specific and adequate treatment. This is of special importance when taking into account the clinical and social implications of this health problem, as well as its growing prevalence. Sleep apnea should be considered as important as other conditions such as hypertension or diabetes, as it affects a very high number of people, and it has important cardiovascular consequences: (Durán et al. Arch Bronconeumol 2004)

Snoring is not a health problem, and a person who snores does not necessarily need to visit the doctor. Intermittent snoring may be a symptom for sleep apnea. If this is the case, you should see your doctor.

Current medical studies on sleep confirm that the sleeping position affects snoring intensity and the index of apnea. In the supine position, the body's own weight triggers a displacement of the jaw and the tongue, blocking the airways and causing snoring and/or apnea.

‘35% of the adult population snores, of whom 75% of simple snorers are positional'.

CPAP is the most widely used therapy for Obstructive Sleep Apnea. This device increases the air pressure in the throat through a mask, so that the airways are not blocked when you breathe in. Other techniques used for treating OSA are a tennis ball attached to the back or posture pillows. However, in many cases these passive positional therapies are disruptive and uncomfortable, so they have a very high rejection rate. The latest advances in the treatment of posture OSA and positional snoring take us to Somnibel, the first patented active positional therapy which offers an alternative or supplement to CPAP, depending on the severity of the OSA; it is thus an ideal therapy for patients with mild to moderate positional apnea.

'Positional therapy and CPAP offer similar results in the treatment of patients with positional OSA.'

The clinical results of Somnibel as a posture therapy system are demonstrated by its compliance with most of the recommendations given by national and international sleep medicine societies.

'Many clinical studies confirm the effectiveness of active positional therapy'